Riding in the copilot’s seat is a treat, but this seat requires a bit more attention to safety than a spot on the benches in the back of the plane. Here are a few tips on right seat safety from air boss Rabbitt Staib: 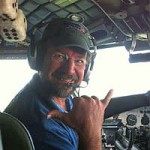 About the Author: Rabbitt Staib

Rabbitt is a skydiver as well as Skydive Spaceland's chief pilot, USPA Safety and Training Advisor. He is a commercial pilot, holds U.S. National gold and silver medals in formation skydiving, was a participant in a 297-person formation, and was a videographer in world record attempts.